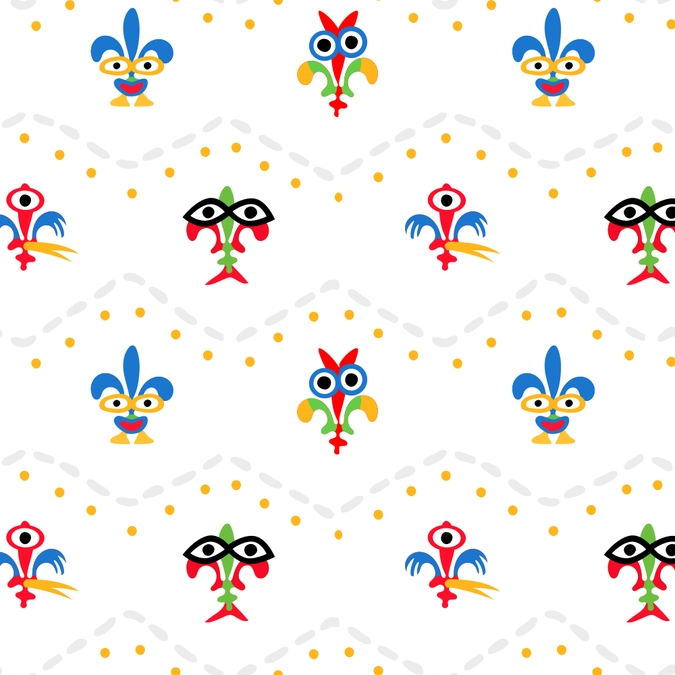 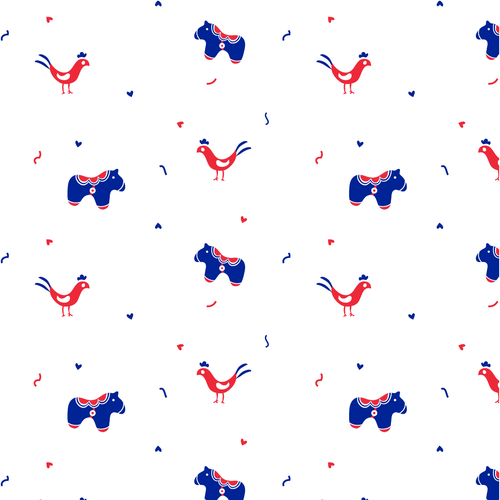 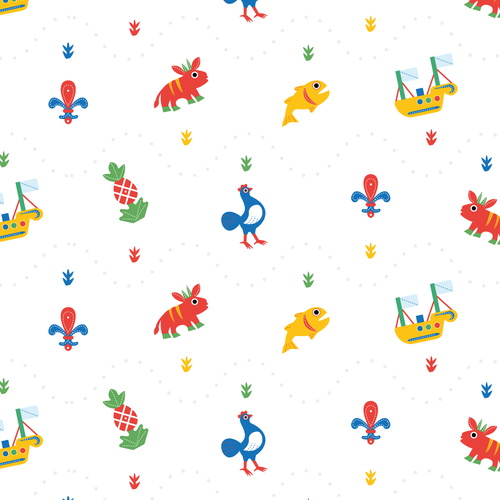 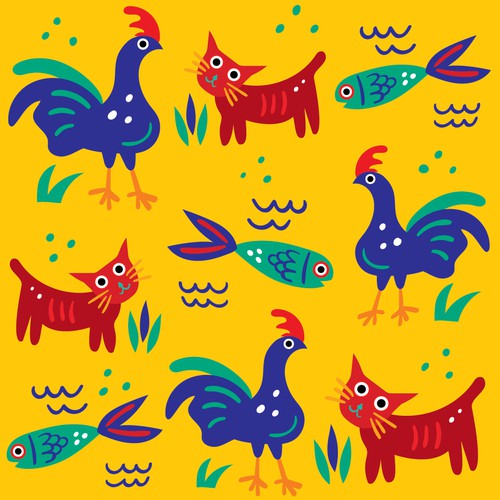 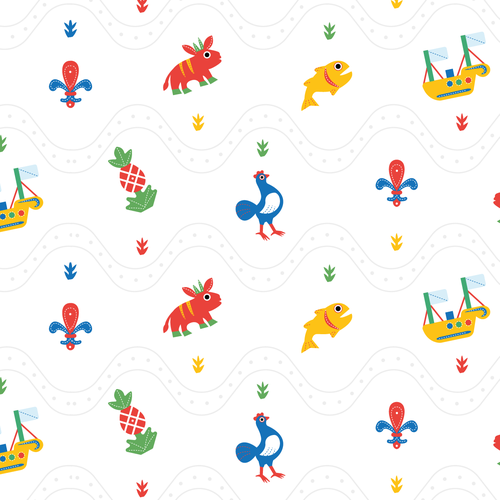 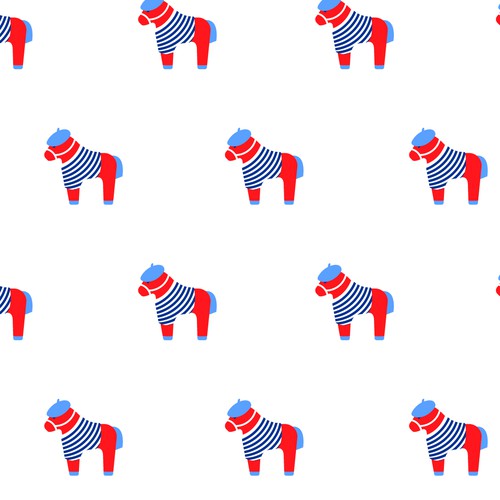 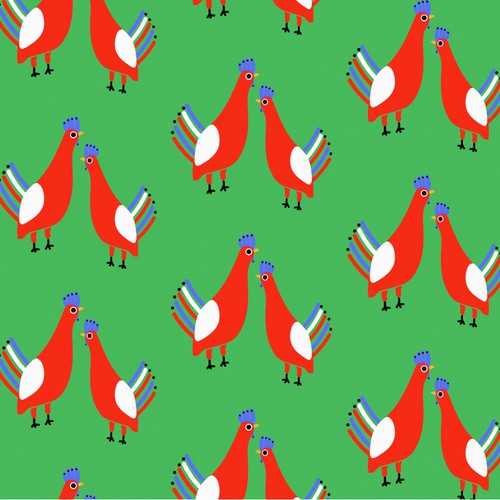 We launch a baby accessories brand, targeted to children whose parents are from different countries or origin. The products sold will be : baby sleeping bags, bibs, baby clothes, soft toys, little bow ties, headbands etc.
We will design our own fabric patterns, which always remind the two countries or cultures of the baby, and therefore show an openness to the world.
At first, the brand will be sold on the French market, for French consumers.

Important things to bear in mind:
- Both fabrics have to be very cute and sweet, since they're targeted to babies!
- They both will be available in different colors.
- The fabrics have to be appealing to anybody, and not only to the people coming from the countries represented on the pattern.
- The patterns are repetitive on the whole fabric.
- The 2 fabrics are not related to each other (there will be more in the future, so each must have its own identity).

Fabric 1 :
We were thinking that the Benin could be symbolized through the famous "King of Abomey" canvas, which represents animals in a stylistic and naive way.
Whereas France can be depicted for example through the rooster (national animal).
You can do a mix of both (the rooster in the Beninese way?) or find other ideas as well, since this is definitely open to creativity.

Fabric 2:
We were thinking that the Dalahäst (Dalecarlian wooden horse) could represent Sweden. The horse could have other colors than the traditional ones (for example, it could be in the blue/white/red of the French flag), or depicted with traditional French accessories ( wearing a beret hat, holding a baguette bread, wearing a blue and white striped jersey etc...).

Again, those are only suggestions, and you can do your own research to find cute patterns that will depict a mix of both cultures!

Among our references/inspiration is a brand called "MiniYou" (https://www.miniyoucreation.com/). We attach a picture of one of their fabrics we find interesting.

We need to have the patterns in the original (real) size (it will be printed in a 100% scale).
- colors in RVB mode
- TIFF and SVG files

Please note that the person chosen will be required to sign a contract to release ownership of their designs and prints, for an exclusive use by our company.

Awesome Graphic for Women's Fishing Shirts
$349
- Company name is Hooked Up Fishing. - Website domain will be hookedupfishing.com - The company itself will sell fishing
59
entries
25
diseñadores
Bespoke Suit / Shirt / Blazer Illustrations for an App
279 £
A bespoke suit app that allows people to design a suit, shirt or Blazer via an app.
28
entries
16
Designer
Illustrate a Flying Chicken !!
USD 349
We are a chic restaurant that specializes in slow roast chicken
36
entries
20
designer
Layout design for brand "Lips"
US$899
Tobacco related product 18 - 45 , women and men
25
entries
8
diseñadores
Giant Mechanical Raven Website Illustration
US$ 1.399
We are a tracking and analytics company that likes bold outrageous design.
19
entries
9
designers
Blue Streak - Boat Name and Graphic
349 $
This is a personal project. Need design ideas for boat name and graphic.
52
entries
26
Designer

Comienza ahora
A SciFi Warrior Master Protector Race Being - Taking out the Bullies and Bad Guys of the MilkyWay
549 $US
Author Juan Jose Piedra a.k.a. John Joseph Stone was born a protector. He spent time in the military and then as a bodyg
32
entries
8
designer graphistes
Agrictulure Vector Icons
$ 349
This company sells raw material substrates and potting soils globally.
67
entries
23
Designer
Custom Image Grows to Long Term Partnership
US$ 349
We are a technology company that is changing the way freight is moved in the US. We leverage algorithms to pool shipment
27
entries
14
designers
We Need Awesome DART FLIGHT Designs
US$ 549
Our products are all related to DARTS and our target audience is dart players from amateur to professional level as well
94
entries
18
designers
Create Cover Illustration For Top Ranked Podcast
349 $
A podcast that analyzes a book each week and uses the concepts to help entrepreneurs with their journeys
22
entries
13
Designer
Character design - electronic dance music album art
US$ 349
I am working on releasing a new electronic dance music track and need album art. BoRahZon is the artist name and the nam
84
entries
28
designers
Más información sobre diseño de gráficos e ilustraciones
Vea como funciona