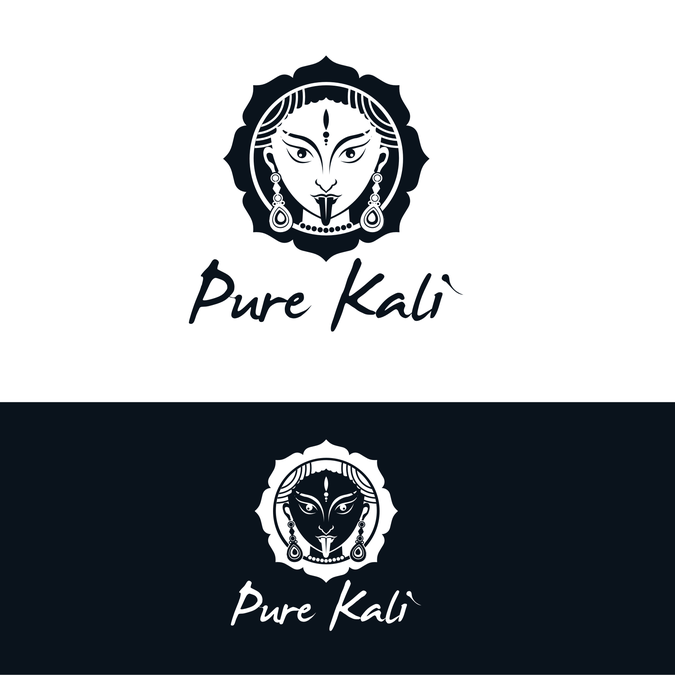 Can you convey the fierce nature of Kali without severed heads? 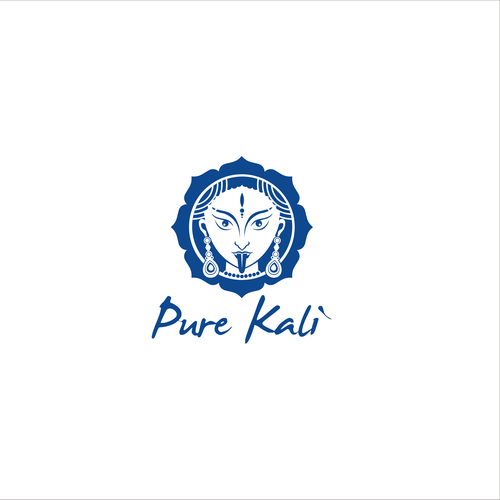 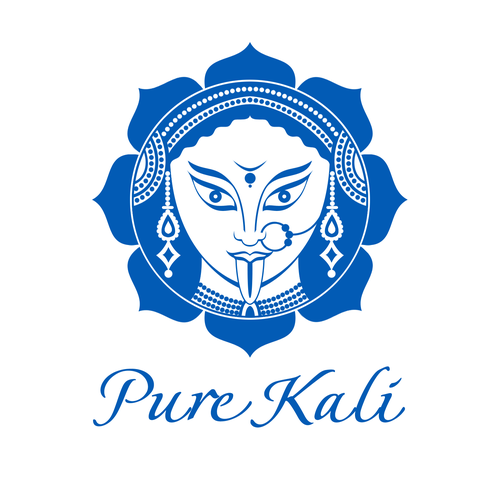 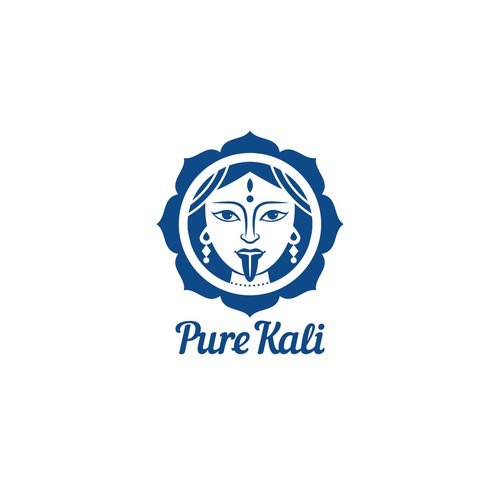 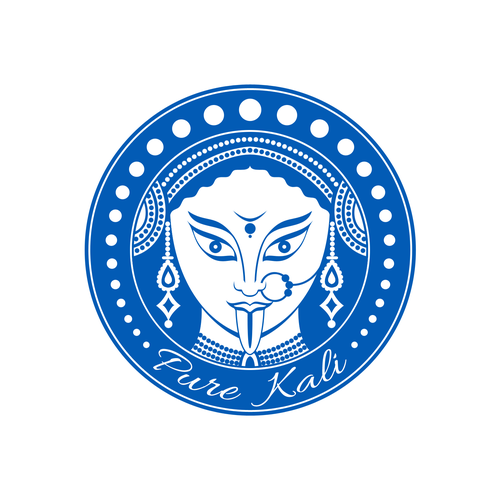 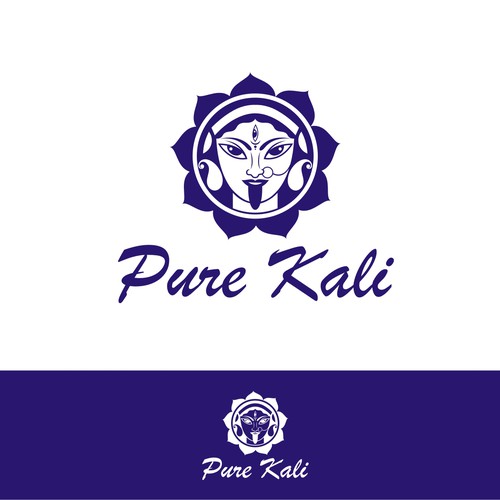 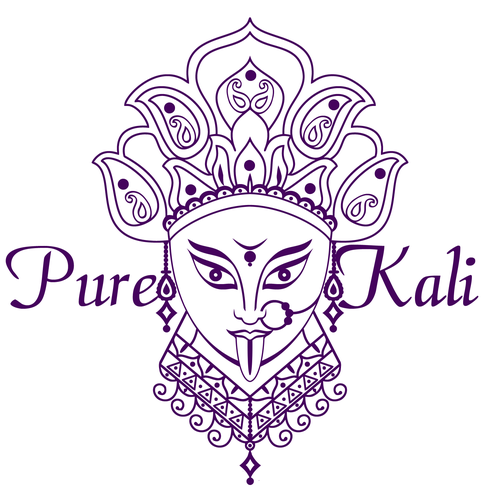 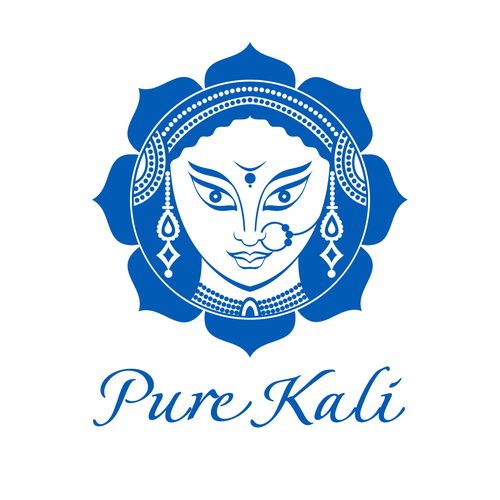 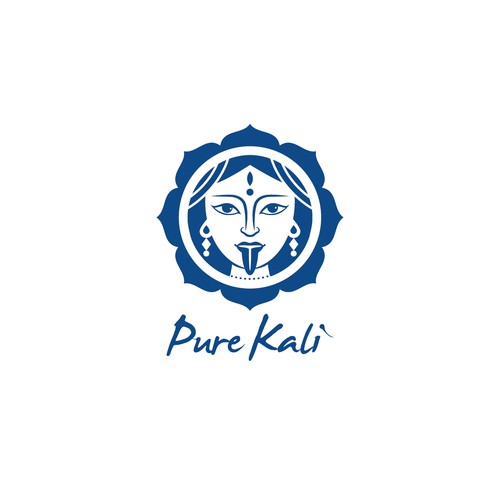 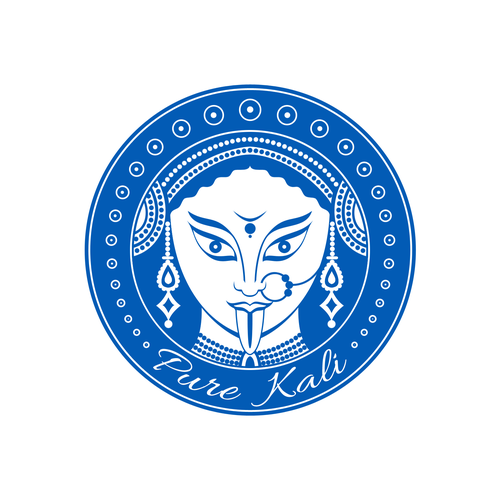 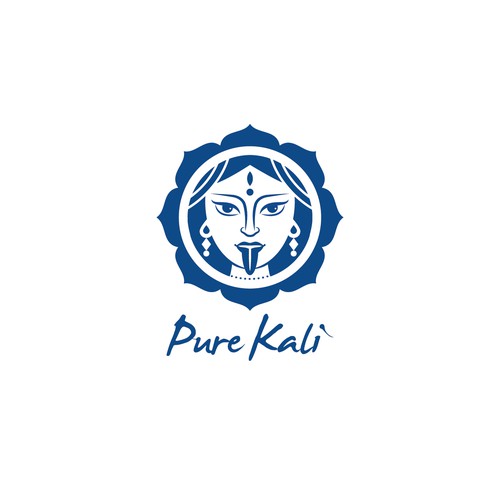 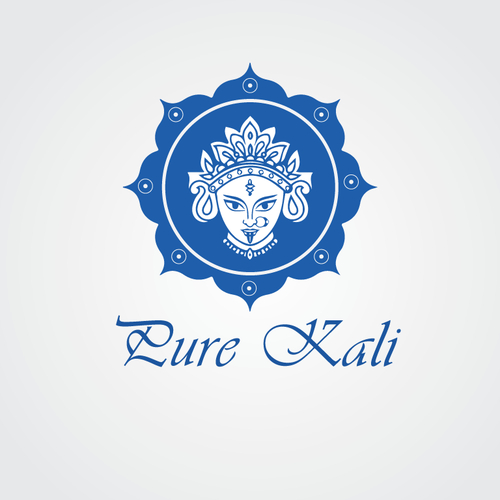 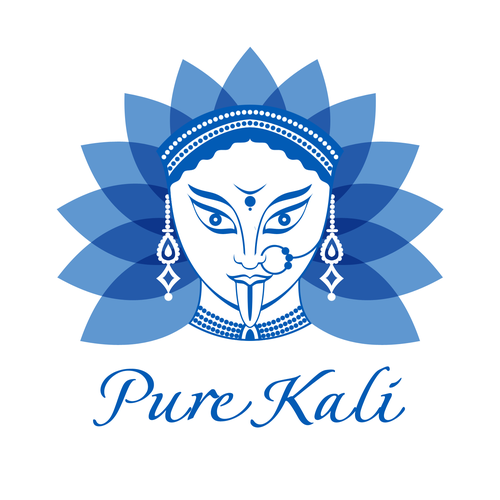 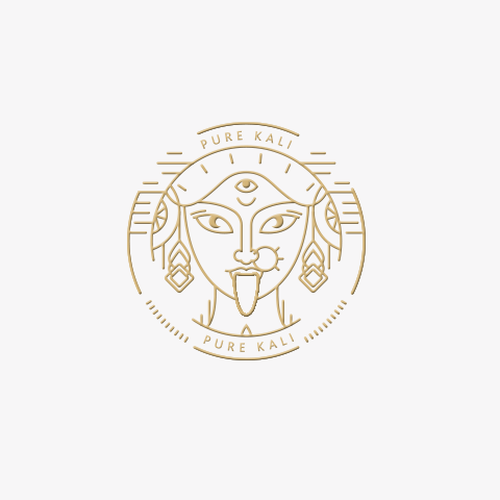 This is a line of yoga clothing targeting only females ages 25-45. "Pure Kali" will be incorporated into all of our designs or sayings on the clothing. For example, we have a shirt that reads "All Arises, All Recedes" - perhaps underneath that would be the words of the logo "Pure Kali". We also see an image that might go along with the words - see files below.

You should read the wikipedia description of Kali, a Hindu goddess. This is also an important read - http://www.goddess.ws/kali.html

Kali is often misunderstood as murder death and sex but we are focused on her desire to bring death to the ego and liberate the individual to the understanding of their spirit nature.

Commonly she is either black or blue and has a necklace of severed heads, a sword in one hand, a severed head in another, a skirt of severed arms...she's a bad ass it's true :-)

We don't want to depict her in this literal way. Instead we will focus the brand on the positive messaging and death of ego.

In the pictures you see attached we picked these because they are stylized depictions of her that would be tolerable...obviously the painting couldn't be a logo...just to show not to show her with severed heads, etc...it would be too much.

Guys,
What we have done is to eliminate all the ones that don’t really speak to us now that we’ve seen designs. Specifically here is what we like about the remaining concepts:
65 – The simplicity of the face seems like it could print well. We don’t like the font.
63 – It seems the artist tried to capture the duality of Kali which is cool – however, it looks to us like a comedy mask. We leave it because of the creative attempt to pull more of Kali’s nature in.
48 – We again like this because it’s an attempt to do something other than a face…possibly we’d go with a face but we didn’t want to just be married to that. It was simply a reference. Purple seems to be the wrong color choice for Kali.
44 – We like the treatment of the face in this case but not the font. Again, we don’t want to see backgrounds around the designs.
16 – We think the font could be doable but less heavy – thinner
Please then overall take away the following:
We like a more let’s say “signature” font like in 16
We’d love to see some things other than faces – if you are doing a face please see the ones we like listed above for inspiration.

PLEASE DON'T TAKE THE ABOVE TO MEAN THOSE ARE THE ONLY THINGS POSSIBLE!

Logo for high end competitive equestrian apparel
389 CA$
Cavaliere, which translates into horsewomen in French, is a brand of competitive attire that is being developed for the
112
entries
27
diseñadores
Straps Backpackline
US$ 499
We will be a backpack line. we are targeting kids and young adults
66
entries
26
designers
Design Vintage Rugby Design for fashion label
AUD 389
Our business consists of re-designing sporting club logos, embroiding the logos onto high end clothing such as polos, ve
42
entries
13
diseñadores
"Devoted" to a new logo for this inspirational jewelry and lifestyle brand.
299 US$
We create jewelry and mala beads that inspire people to devote themselves to something bigger than themselves.
76
entries
13
diseñadores
Independence Boutique female empowerment logo
299 $
Independence Boutique is an online clothing boutique for women. We specialize in sourcing fashion that is made in the U
69
entries
19
Designer
Design a powerful logo for a mystical fashion line
299 $US
Hi all, the logo is to be placed on scarfs, capes and ponchos made 100% of south american alpaca. If you want "100% ALPA
92
entries
27
designer graphistes

Comienza ahora
Be brave and create the new logo for SCORPIOS
5.299 MXN
We sell urban footwear and streetwear, the target audience is urban fashion lovers.
77
entries
29
diseñadores
Make a creative luxury logo for one of the best $tyling entertainment groups of Amsterdam!
259 €
We do the styling & book the dancers for high end clubs and festivals. We are known for our creativity and RICH appearan
162
entries
15
designer graphistes
UV Ninja Logo Contest!
299 $
PLEASE NOTE: I do not want cartoon style ninjas! Please read below for what I am looking for. Thank you. My company
211
entries
23
Designer
Fashionable Boutique Logo needed for new business owner
US$299
I am opening a clothing boutique store. My target market is women aging from 22-35. I will be selling on trend and class
125
entries
18
diseñadores
Design a logo for the clothing brand
259 €
English : The clothing brand is "Zephire". The customers are between 20 and 30 years old. I hope my project is sure
292
entries
76
Designer
Create A Sleek, Modern Logo for Fashion Company
US$299
At Canvas, we help men and women discover their personal style and build a wardrobe that reflects it. We work with men a
86
entries
15
diseñadores