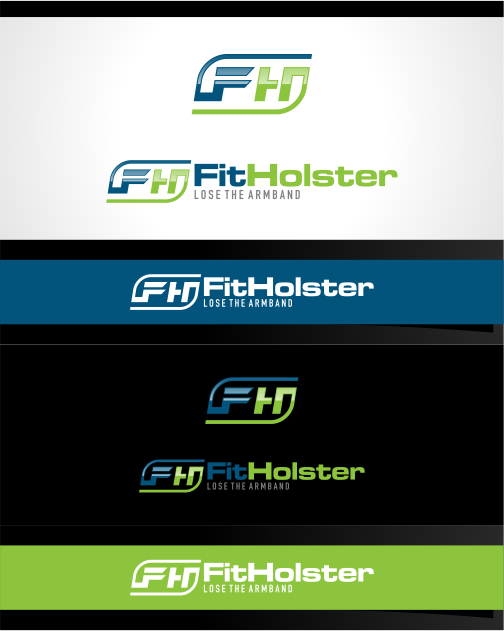 Logo for the product that will put an end to the fannypack of the gym, the fitness armband 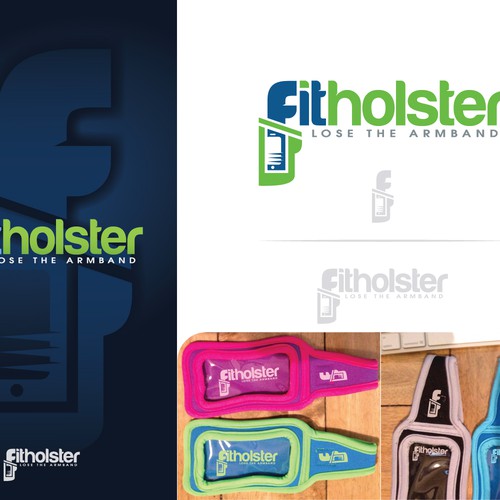 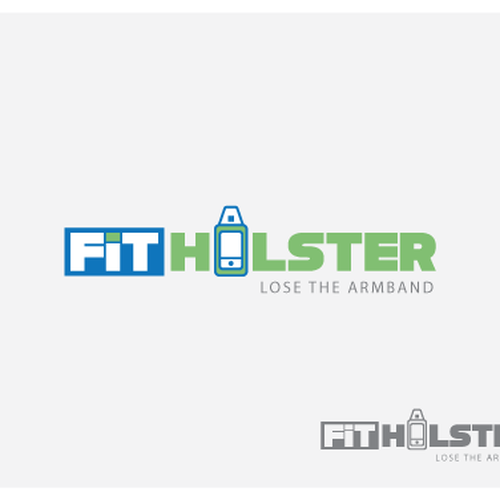 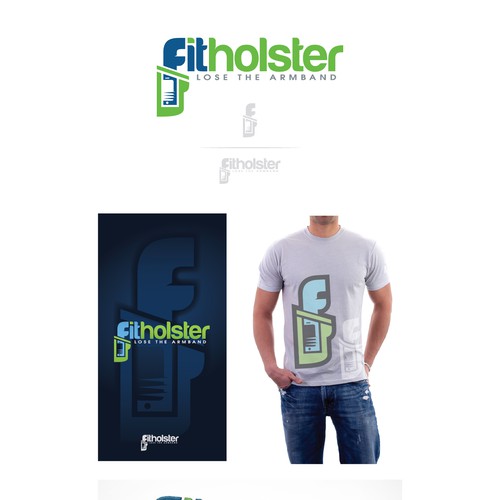 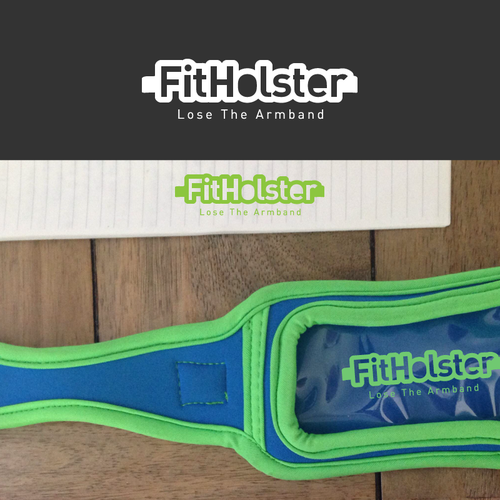 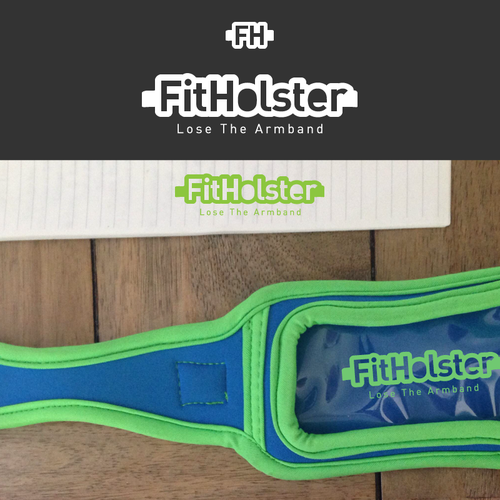 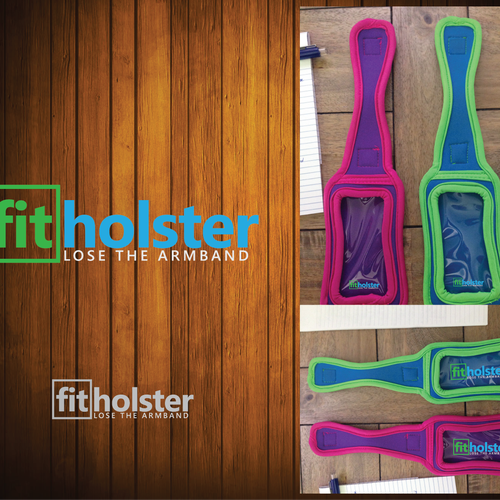 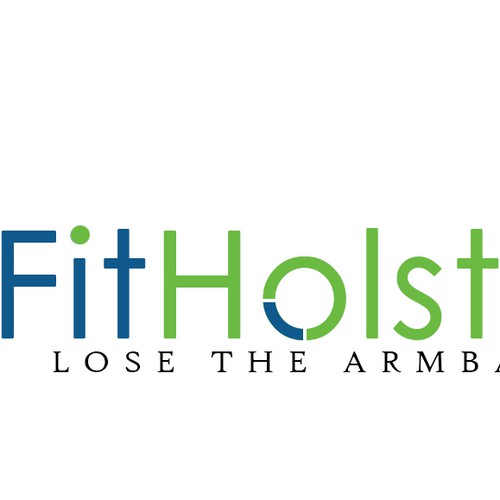 "Lose the Armband" (It is not a MUST to have, but it would be nice)

We sell our patented "FitHolster," which is a neoprene smart phone and/or MP3 player case with a clear window so the user can operate the device while it is protected in the case. Think one of those horrible fitness armbands without the armband.(we are attempting to secure a deal with "Ariaprene," a eco-friendly neoprene substitute) The neoprene case has a strap that extends past one end of the case, the bottom, about one and a half times the length of the case, it is stitched/sewn to the end of the case and necks down(narrows down) to the middle, then extending out and necking back out into a tab. Each end of the strap, the end closest to where it is stitched to the case and the opposite end, furthest from the case, each have a magnet sewn into the neoprene. This strap folds over the users waist band to clasp with the user's pants or shorts in-between such that it secures the case to where ever the user wants it, like a removable pocket.

This allows the user to move the case out of the way from heavy weights in the weight room. It also prevents sweat and dirt from coming in contact with the expensive device. Imagine using a barbell and/or dumbbells with a phone in your pocket, it would crush your phone. In addition, the sweat would ruin your phone too.

Next, no one, NO ONE, likes those fitness armbands because they are extremely uncomfortable, yet there are no other solutions aside from putting it in your pocket. In addition to the armband being uncomfortable, it prevents blood flow to one arm, thus preventing oxygen and nutrients from reaching the muscle fibers when they need them most.

Lastly, the belt clip and mini fanny pack belt clip... I'm not even going to comment on those.

I called it the FitHolster because when the magnets are attached, the case hangs down to allow the user to bend at the hips without the device being crushed by the user's hips and upper thigh. This is VERY IMPORTANT to weight lifters bc most all movements use the hip flexor muscles, and any device has to be able to fall out of the way or it will be crushed.

The slogan for the FitHolster is: "Lose the Armband." In addition, we use a lot of bright colors for our product. We have electric blue with a neon green boarder fabric, and neon green stitching. For females we have Purple, with a Neon pink board and neon pink thread. In addition, we have camo, digital camo for military, and an all black. We will have more and more bright/neon color schemes to the point the user will be able to choose any color he or she would like. These bright colors are an important part of our business. It separates us from the other companies around.

I will try and provide pictures of the use of the product, and the product itself as soon as I find out where to post them. Our target Audience is the 20-30 something fitness enthusiast. Specifically the gym goer. We would also like to sell to runners, cyclists, golfers, outdoors people, etc. However, our CORE audience is anyone who would take his or her phone or mp3 player to the gym. Again, mostly 16-36 year olds; however, we will have blander colors for those that are older, but the bright neon colors are HUGE right now in the fitness industry. Middle income people, lower to upper.

You don't need to use the slogan, I just put it on there bc if you have a good idea for a logo using the slogan that would be ideal, but I don't know if it would be better to simplify the logo without the slogan and just paste it underneath it if need be??? I guess that is up to you guys to decide. I saved a bunch of the $99 logos for sale that were, of those I saw, the best. I like the more cartoon like logos, but I don't want to take anything off the table. Moreover, I've uploaded a picture of the product prototypes. This is what the product is going to look like.

Design a sophisticated logo for Grace+Flow barre, Pilates and yoga studio
CAD 389
Yoga, Barre and Pilates studio that focuses on posture, core and grace. Target audience is the professional working ...
82
entries
15
diseñadores
Logo design for Ruben Tabares (www.rubentabares.com) Wellness
£229
I am a humansports performance expert providing strength and conditioning, nutrition and sports science to some of the b
134
entries
14
デザイナー数
Wild Island Women Tasmania's first adventure community for ladies
A$389
Wild Island Women is a supportive adventure community in Tasmania for women who want to get out there in experience our
71
entries
8
デザイナー数
Divine Flow Massage/Bodywork business needs unique, sophisticated logo.
350 $US
Massage, Bodywork, Wellness
189
entries
32
designer graphistes
Design a logo for youth sports training and injury prevention program
US$ 299
Provide training programs and guidance targeted towards keeping adolescent athletes in sport and off the sidelines or...
210
entries
40
diseñadores
Pump Up Fitness Logo Design
USD 299
My organizations target audience is both men and women in the fitness industry....
51
entries
11
diseñadores

Comienza ahora
help redesign a Fitness Department logo
USD 299
We are an upscale fitness facility this logo is for the Fitness dept shirts and business cards
49
entries
9
diseñadores
Strength and conditioning gym on the farm needs a fun, cool logo!
379 £GB
It's a strength and conditioning / personal training business. The gym is set on a Dairy farm. Hence the name cattle ...
84
entries
43
designer graphistes
Design a simple, but powerful logo that reflects Hope, Strength, Recovery for Strong Again
US$299
Strong Again is a company dedicated to reclaiming strength and wellness back to the individual that has gone through med
377
entries
60
diseñadores
Men's lifestyle brand needs a Bold, Minimal logo
799 US$
Fitness and lifestyle brand for men / target audience: men 18-34
111
entries
27
diseñadores
Powerful and impactful Logo for a Health and Wellness Brand
$299
we are a wellness company that focus on improving ones self for a purpose. i.e. our kids, the environment, others. While
57
entries
18
デザイナー数
BonFitt new Health&Fitness company UK
GBP 229
Health, Fitness and Lifestyle brand targeting men and women wanting to improve their lifestyle and wellbeing.
77
entries
24
diseñadores