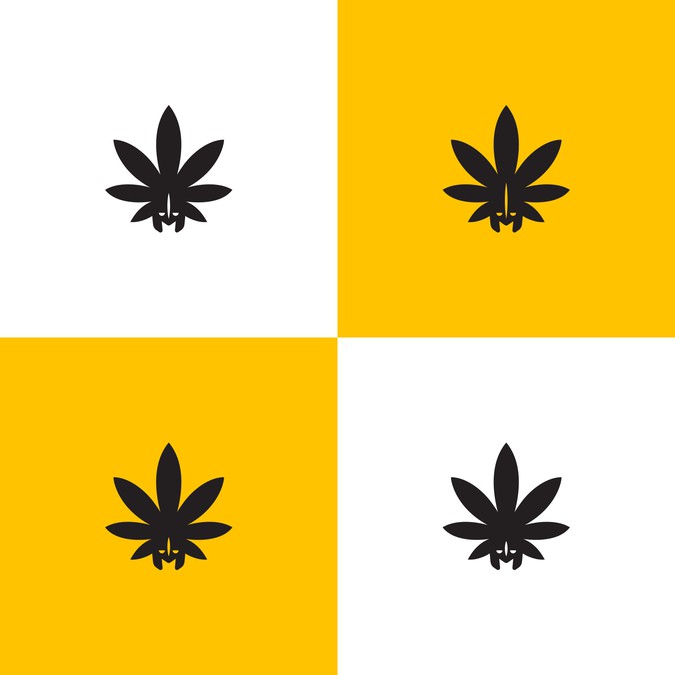 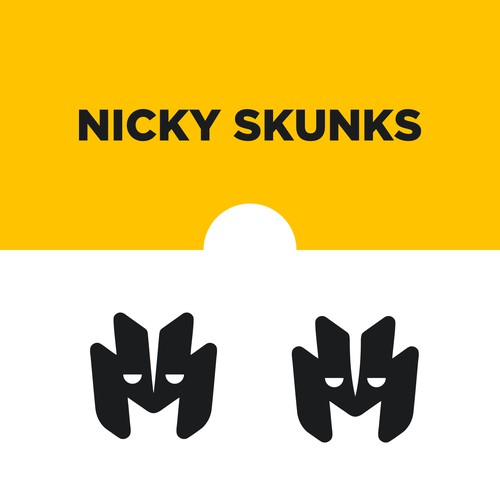 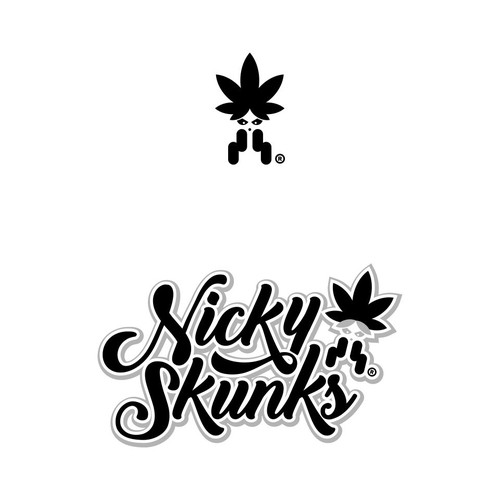 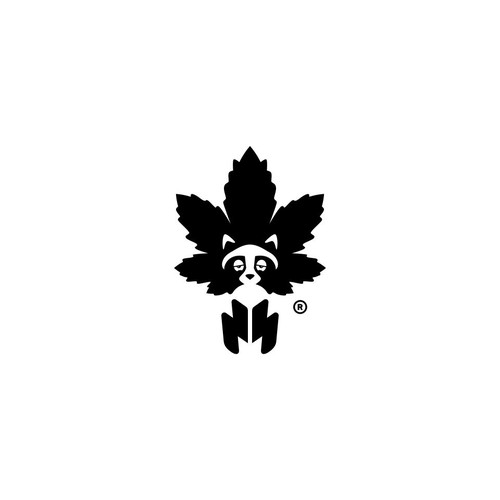 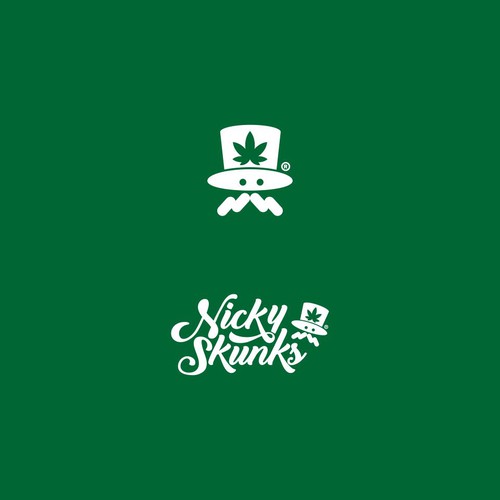 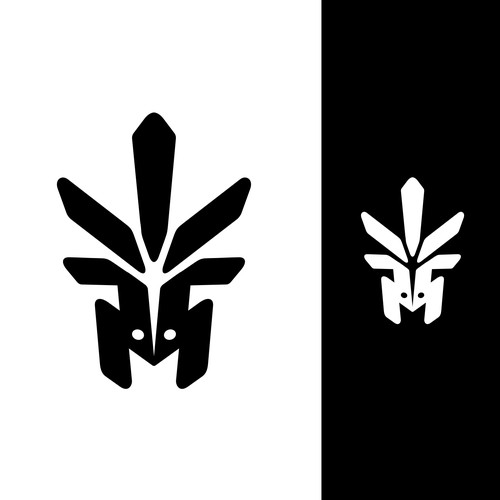 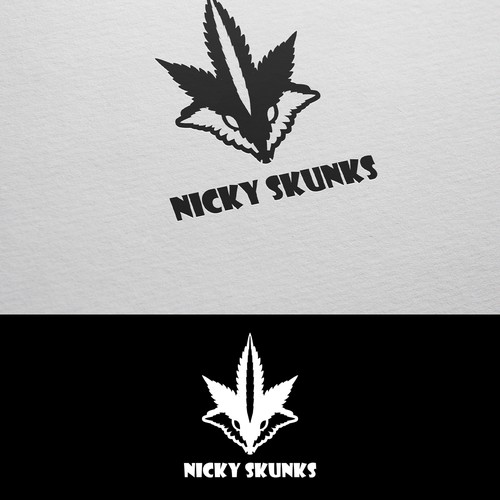 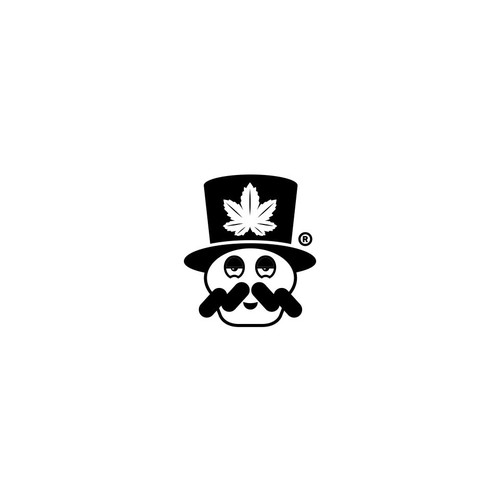 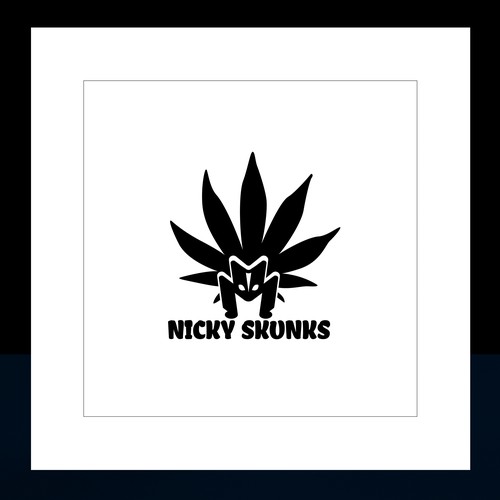 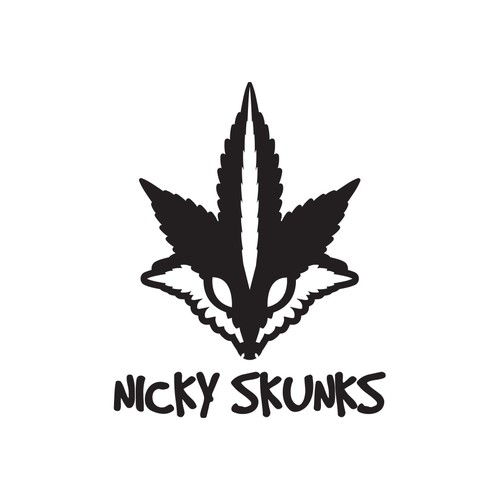 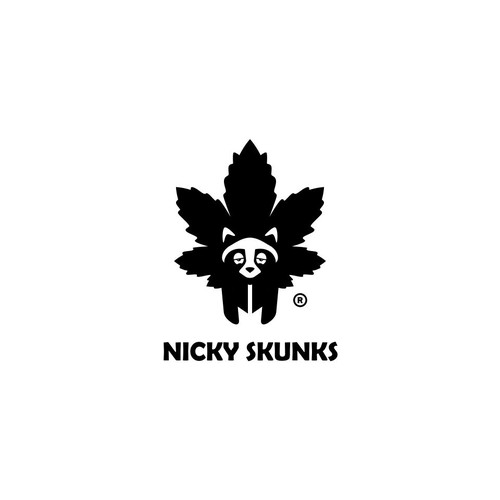 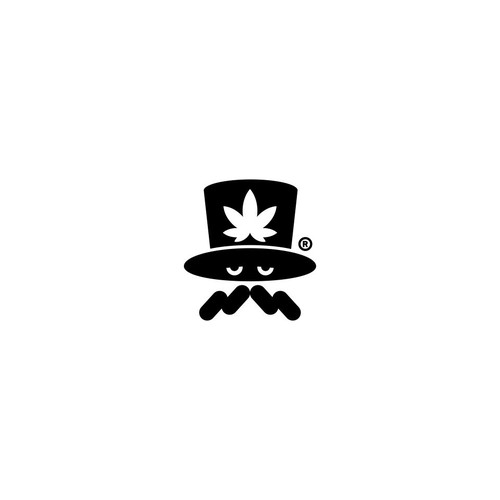 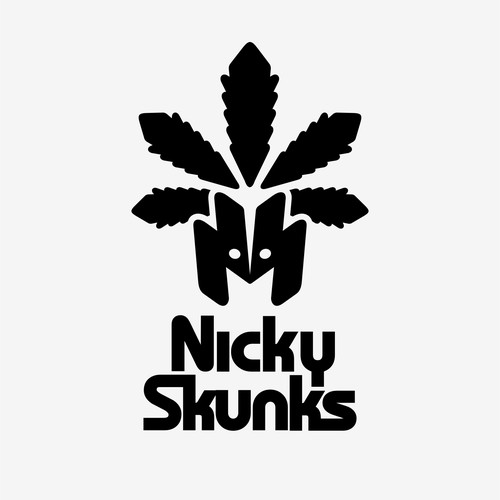 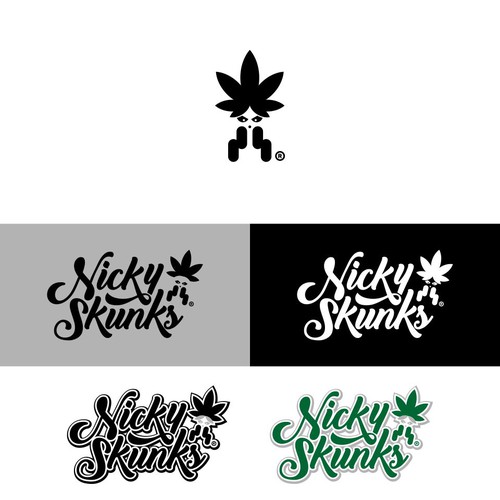 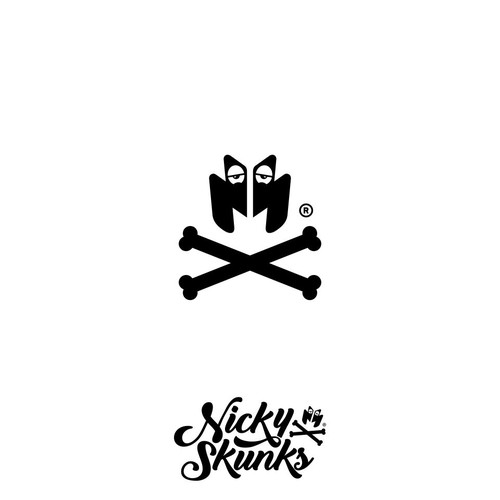 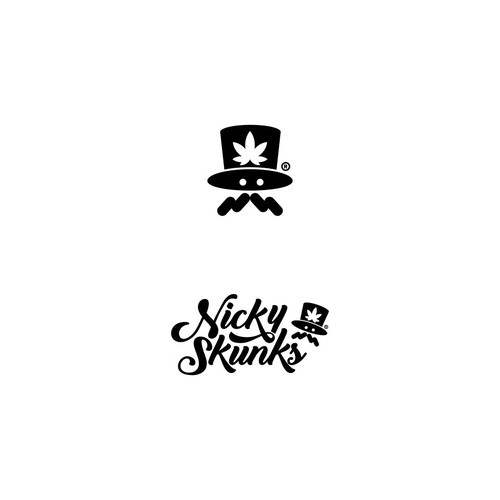 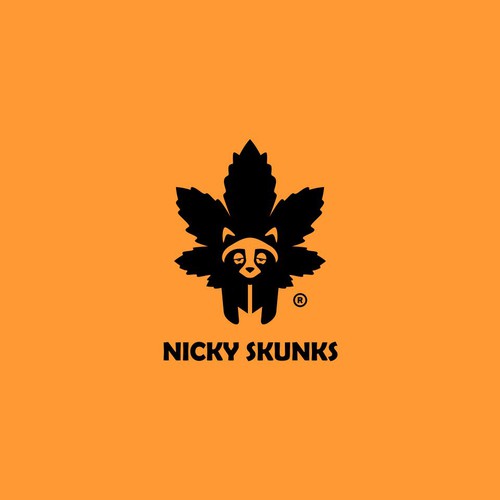 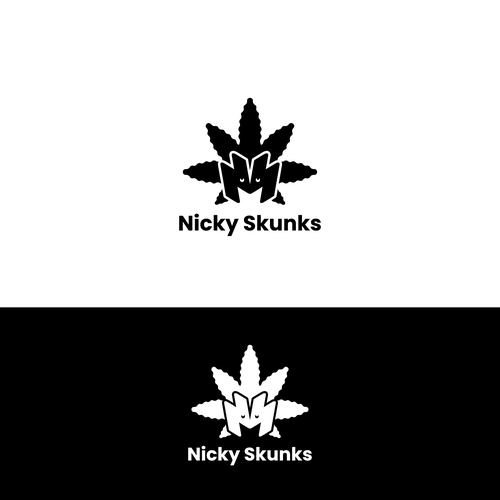 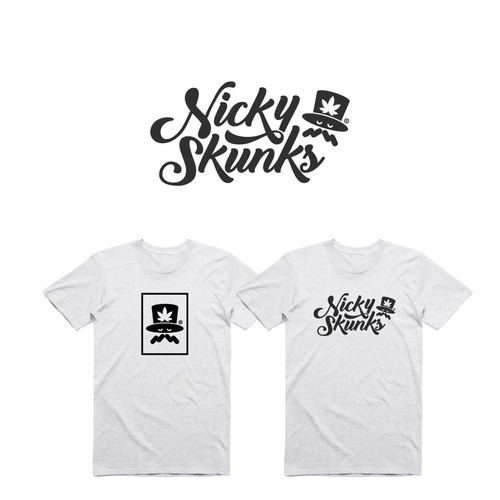 It's for a clothing brand that is marijuana and pop culture inspired.

Attached are a few screenshots of our current logo. The name of the brand is Nicky Skunks and it's a marijuana themed clothing brand, hence why we have incorporated the shape of the letters N and S and the marijuana leaf in the logo.

To explain the current logo in detail, we took the N and S letters and designed them in a way where it's identical but just flipped (attached picture #1 or you can view this video, https://mytex.d.pr/G1INix) and merged them together while keeping a bit of negative space in the middle to represent the white stripe of a skunk. We then added two circles to represent the eyes (attached picture #2) which now makes it look like a skunk's face.

We wanted the viewer to know simply by looking at the logo that it had something to do with marijuana, so we added a marijuana leaf (attached picture #3) and then merged the N and S letters with the leave so that it would represent the skunk's tail (attached picture #4).

And, of course we wanted to add the brand name in a somewhat friendly way which we did (attached picture #5)

What we're trying to accomplish now is simplifying the logo and making it less busy. We want to retain the N and S letters (because it's clever lol) but we're open to redesigning it if needed. Currently, the "eyes" have more of an evil look and we want something a little more friendly or inviting, but not childish.

We're completely open to redesigning the entire logo mark, but we would like to have these main components incorporated (if possible) in the logo - a simplified and solid marijuana leaf (without the white stripes in the middle of each leaf, but we're open to separating the leaves if needed), and the letters N and S which look like a skunk's face. If incorporating the N and S letters is not doable, but you can still make the marijuana leaf and skunk work together using the negative space, etc. we're totally open to that as well. We just want the logo to represent the brand properly in a cool and clever way. When looking at the logo, the first thing the viewer must see is that it is a marijuana leave, and then subtly then the skunk's face and NS.

We'd like it so you'd want to wear a t-shirt with just the logo/brand mark on it because it looks super cool...like the cupcake and crossbones example we've attached.

The picture attached of the cupcake and crossbones logo we really love because of it's simplicity and uniqueness. Plus, it has a good & bad, and fun yet dangerous vibe to it. Also, we like how the silhouette is very recognizable and how it merges two very well known and identifiable symbols (cupcake and crossbones) together.

As far as the brand name, Nicky Skunks, we'd like something that's simple and works well with the logo mark. The logo mark is more important and that should take priority, please.

Thanks so much and we can't wait to see what you come up with!

Modern minimalistic logo for a fantasy and sci-fi inspired accessories brand
CA$ 669
We sell mid to high end fantasy and sci-fi inspired accessories that are modern and practical. Some items we sell may in
518
entries
75
Designer
Logo For Emerging Shoe Brand (This is a real business and your logo will be seen)
$499
Elches Company Philosophy and Vision There are no borders, language barriers, or political preferences. People around
410
entries
87
diseñadores
We need a brand "mascot" of our dog Indy designed to match our street style centric clothing brand.
400 $US
We are a local street clothing company that focuses on style centric young adults 18-30 that want to represent their sch
108
entries
32
designer graphistes
Design this logo and spread you love
US$299
We sell product like cotton washable face mask, we want to tell people that wearing a mask it’s to protect yourself and
90
entries
32
diseñadores
DUCK HUNTING clothing brand LOGO!
US$299
We sell tshirts, hats, and hoodies targeting the waterfowl hunting community. We are based in the brackish marshes of So
69
entries
22
diseñadores
Logo for Web Shop "The Mask Shop" wanted
309 CHF
We run an e-commerce shop for protective masks with a fashion flavour. The do offer large variety of cotton mask in many
338
entries
82
designer

Comienza ahora
Logo design on Sneakers
US$299
this is for a site selling sneakers like yeezy ,jordan ect..
51
entries
23
diseñadores
Dapper Roo Logo for Australian Menswear Brand - *Illustrators*
AUD 399
We sell fun and colourful socks & boxers for men. Bright patterns featuring sports, animals, food & drink. Our brand dap
87
entries
27
diseñadores
I need a powerful logo to make people feel strong and confident. I want a crown symbol as the logo.
399 USD
I want to sell merch such as clothes, hats, sportswear etc. While making the old and young people feel powerful wearing
63
entries
11
designer
Design for sun & fun beach t-shirts and apparel (Company Logo)
$499
T-Shirts and print items based around the beach, sun, surf, sand, palm trees, ocean, beach signposts, etc.
129
entries
34
デザイナー数
Best design will be awarded
$ 429
Ugress is an all hemp biodegradable environmentally friendly clothing line for both men and women children as well
149
entries
21
Designer
Fashion brand logo design nyc feel/mindset. Leaning more into the feminine side. Please read brief.
$299
11E, a number and a letter that at one point in her life was just that to founder Ashley Soto. Born and raised in New
23
entries
8
デザイナー数