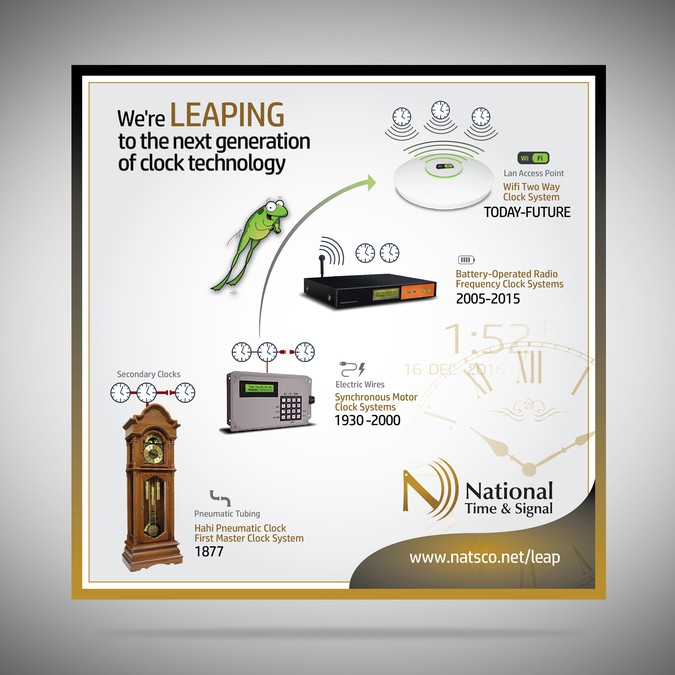 Frog with Clocks - Flyer for Promotion 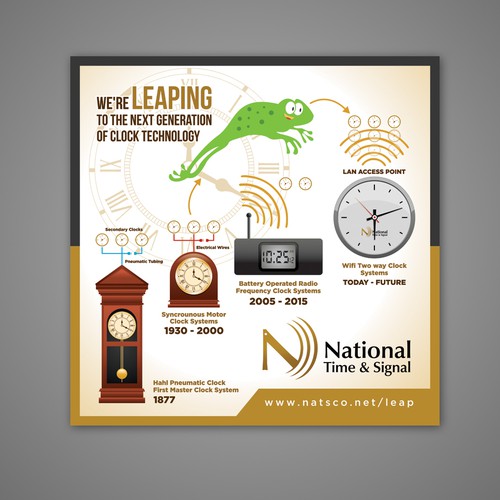 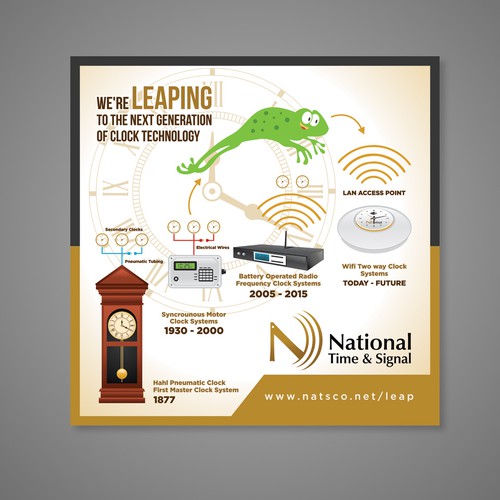 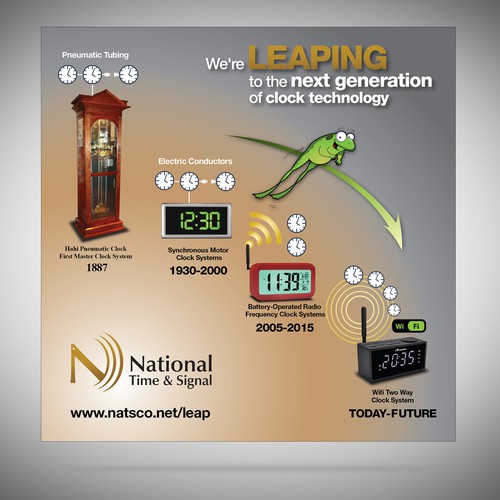 We manufacture clocks and fire alarms for schools, hospitals, and businesses.

We are releasing a new Wi-Fi connected clock and we're sending out samples to various customers. We'll be including a 15x15 inch flyer in the box that discusses how these new clocks are a "leap ahead" in technology. We've been producing clocks for over 100 years, and connecting a school's clocks directly to their Wi-Fi network is a big improvement over previous systems.

We've attached a mockup of what we're looking for. The flyer will show the progression of technology over the years, with a progression in images from the bottom-left to the top-right side (note that this positioning differs from the mockup). In earliest three clock system types, the "secondary" clocks were controlled from a "master" clock control unit using pneumatic tubing, electrical wires, or radio waves.

In the bottom left we'll have "Pneumatic Clocks". For an example of what the main "master" clock looks like on one of these systems, see the attached pneumatic1/2.jpg files. There will be some text describing the pneumatic clocks systems -- again, see the attached pdf file.

Finally, in the top right will be our new battery-powered wi-fi clock. This will have waves going both to and from a Wi-Fi access point. On this type of clock system, clocks are getting their time from cloud servers synced to atomic time.

There will be a FROG leapfrogging from the synchronous motor clock systems to the Wi-Fi clock systems. This signifies that National Time mostly skipped over that technology, going straight to Wi-Fi enabled devices.

In some of the empty space one the illustration, we'd like this message: "We're LEAPING to the next generation of clock technology". There should also be a URL linking to "http://natsco.net/leap" Finally, National Time's logo should feature prominently somewhere on the page. See attached for png/psd images.

We prefer an illustrated style, particularly since we don't have any high-quality images of older clock systems. If you feel you cannot make a decent submission using the supplied artwork and your resources, let us know and we'll see what we can find that would help get our point across.

Thanks for your interest!

Leaflet for LED lighting
£ 139
LED lighting for your business...
44
entries
10
designers
Tri-Fold Leaflet design for growing business.
USD 299
Age 23 -65, Business Owner, Construction Contractor, Commercial businesses, industrial businesses...
57
entries
10
diseñadores
Door Hanger for Painting Contractor
$199
We are a painting contractor who specializes in high-end finishes. Our customers live in golfing and gated communities.
73
entries
11
diseñadores
LineStar & BU Flyers
199 $US
We are a full service provider of midstream integrity maintenance solutions to more than 80 clients across the country
16
entries
3
designer graphistes
Entech Innovative Half Page Advertisement
$ 299
We are a custom engineering/fabrication company. We design and build what has never been built before. We do custom an
36
entries
18
Designer
Racing themed Roofing Company looking for a creative Postcard design
$ 199
We replace roofs due to Hurricane damage. The only portion the homeowner pays is their deductible. We offer free roof
46
entries
8
Designer