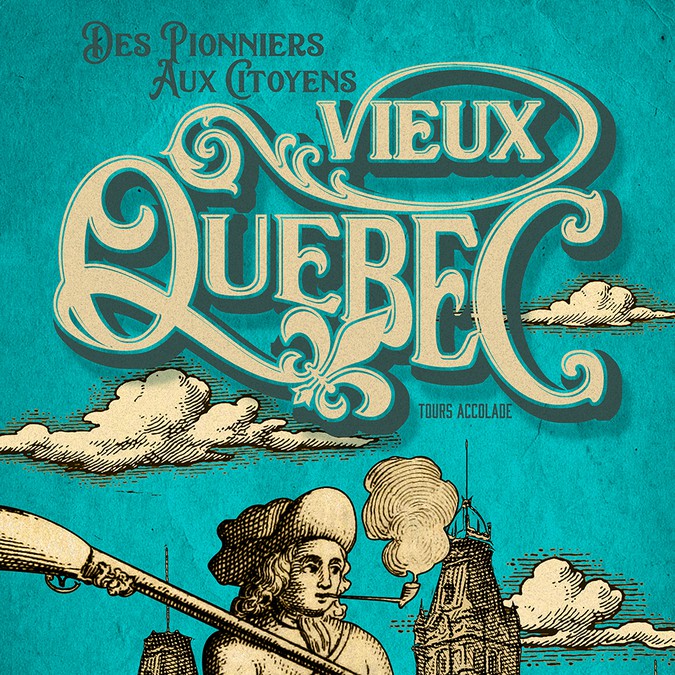 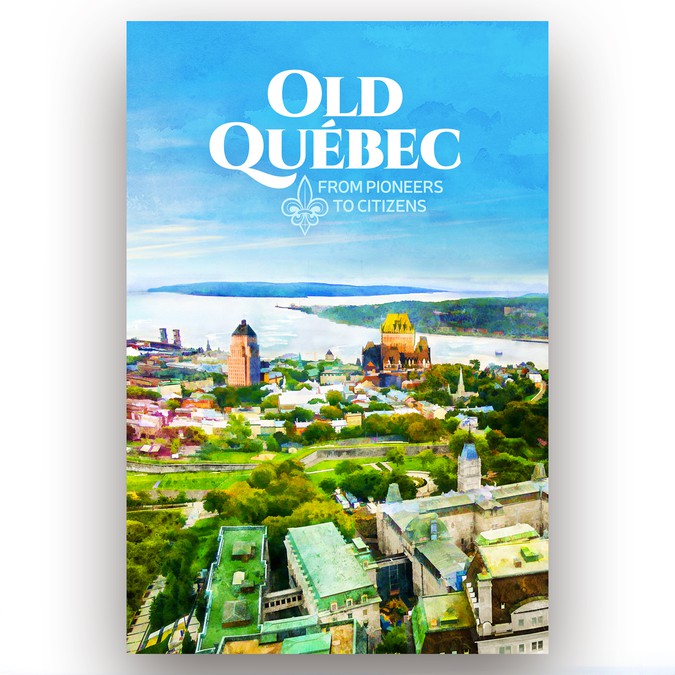 Design an awesome poster for a historical tour in Old Quebec 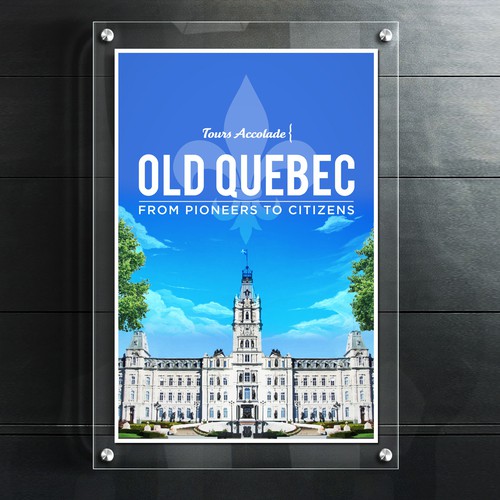 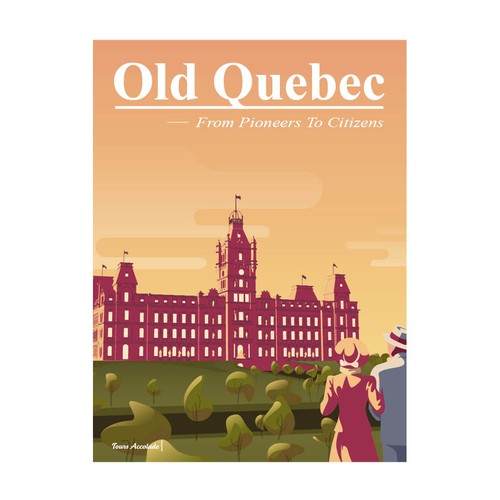 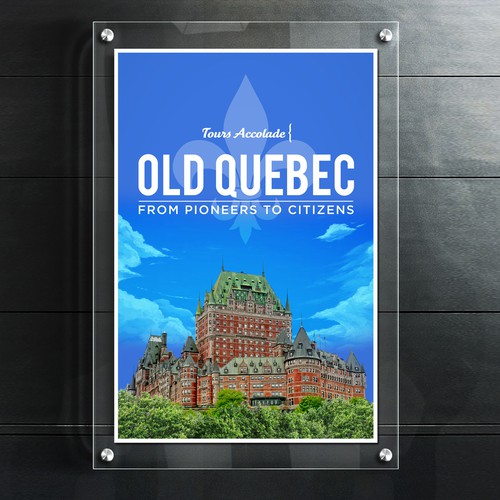 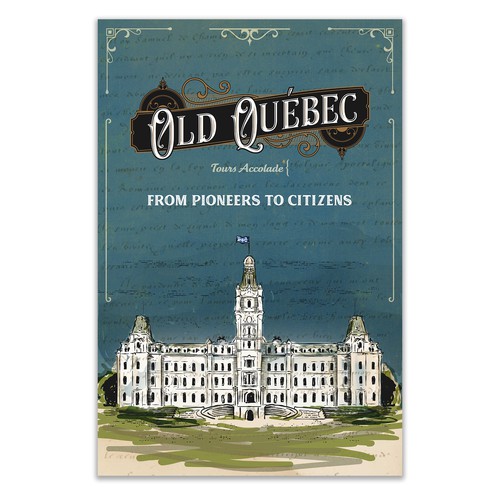 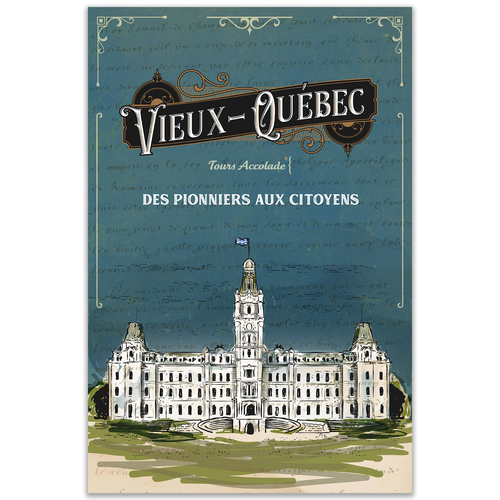 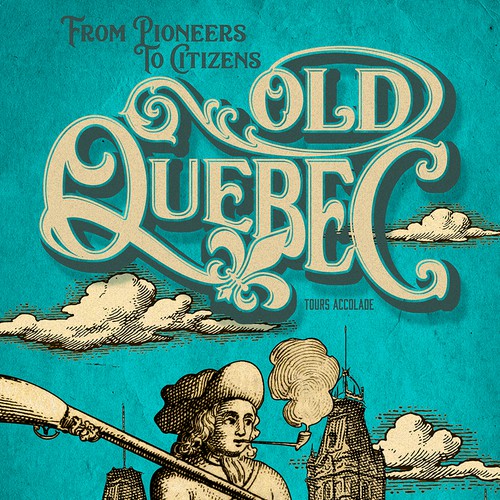 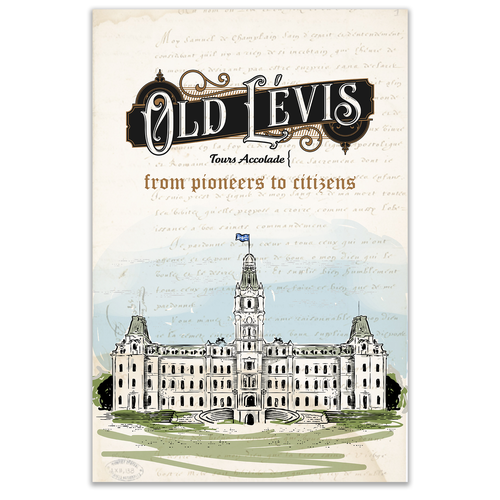 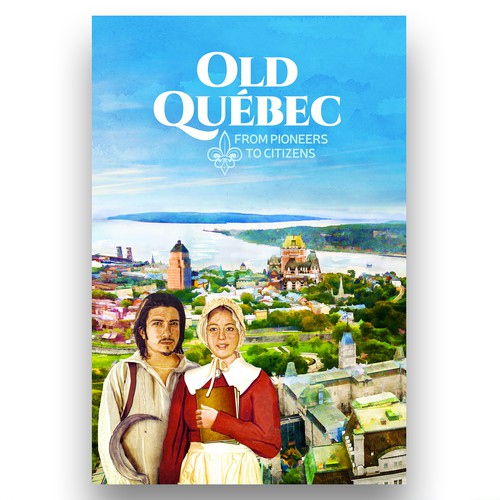 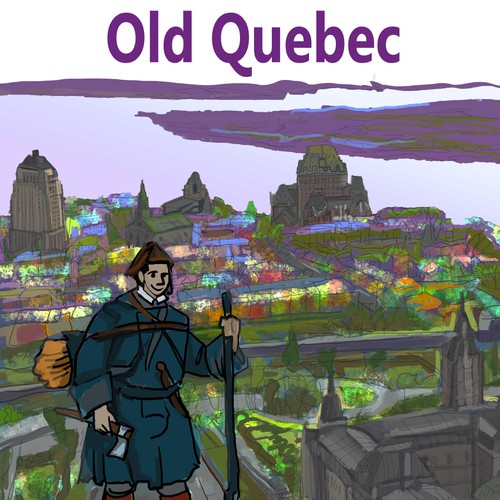 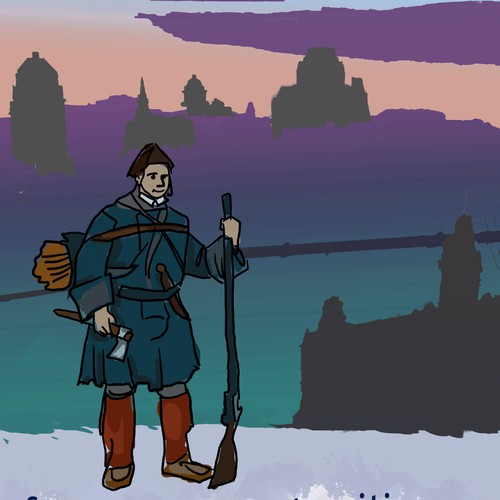 We provide classic and private walking guided tours in Quebec City and Lévis. Audience is mostly Americans and Canadians (English and French-speaking). Tourists and locals as well.

This specific tour is about Old Quebec, Upper Town, from the Château Frontenac to the Parliament.

I would like a nice poster to :
- promote my tour on my website and flyers,
- print the poster to give it to people who helped me creating the tour (historians) and partners,
- eventually print postcards.

The purpose is to promote the tour, NOT to make a summary/resume of it.

*It doesn't need to be realistic with full of details, but it must be accurate : the Anglican cathedral has 1 spire, not 3 ; the Château Frontenac is more Renaissance style and not middle-age, etc.
**You can work just with the English version, but keep in mind for final round I'll also need a French version.

Creative posters with a powerful concept or poetical are more than welcome. I like less photomontage.

Less is more : do not illustrate too many things.

Style : no specific idea, you're pretty free ! I prefer illustrations, original artworks, rather than photo montage.

The poster must contain :
- the title (Old Quebec / Vieux-Québec),
- the subtitle (from pioneers to citizens / des pionniers aux citoyens),
- NO description or any other text on the poster,
- the logo (discrete, you can also just write the name of the company with a different font),
- an element to understand it's in Old Quebec***

***Be careful : Place royale, Petit Champlain and everything below the cliff is not Old Quebec (even if people think so, it's a mistake, it's Old Port).

You can illustrate the fortifications, but do not focus on wars or soldiers (that's because I've another tour for that) and no Winter scene (already have a tour for that too).

IDEAS (just ideas) :
- postcard style (bird's eye view from the Parliament to the St Lawrence, with the spires of churches and roofs of buildings, etc.),
- concept to illustrate something from the pioneers and something from the citizens : giant pioneer from the 1600s harvesting modern lys flowers on a "small Quebec City" (wall, couple of houses, cliff...) ; a pioneer looking at the Parlement ; Old Quebec first century illustration with a giant Lys flower rising on the background...).
EDIT : could be a windmill over hill in the foreground (http://archeologie.ville.quebec.qc.…du-moulin/) and the Parlement on the background.
/EDIT

Brief history of Old Quebec (elements used during the tour itself) :
- Natives were here of course, unfortunately they aren't a big part of the tour,
- French settle down there mostly for the fur (beaver and more), first settlement in 1608 with Samuel de Champlain,
- British managed to conquere the city in 1759 and Canada became British,
- Canada became independant, progessively, and a democracy, Quebec City used to be its capital ; Lys flower became the symbol of the Quebecers and French-Canadians.

The illustration doesn't need to be complex (not too many elements, characters or buildings). The idea isn't to give a summary with the poster, but on the contrary to be an invitation. When we see the poster, we must think "wow it's beautiful, attracting, it looks interesting, let's book a tour!".

If something is illustrated, it must be accurate (Samuel of Champlain wasn't dressed like in the 1980s ; the Parliament has 1 main tower and is second empire style).

Please keep in mind, the picture attached :
- are here to give you an idea of how the area looked like or still look like,
- I DO NOT have rights on them, so please do not use them, they're here just for inspiration (except when it's mentioned you can use),
- check the comments for each pictures.

Before you use something from the web and base your work on it, feel free to send me a message to ask if it's accurate or even in Old Quebec. Google Image shows a lot of things which are not related at all to Old Quebec.

Create a visually inspiring manifesto for Our Whole Village
EUR 169
We offer family-focused trips, tour and activities. Our target audience are 30-45 yo moms with children between the ...
35
entries
11
Designer
Create an A4 poster for a monthly journal for a video company.
A$199
We producer web videos for Hotel and Resorts in Australia...
6
entries
3
designers
Airstream Rental Shop
$199
We rent Airstreams to campers in the Washington DC Metro Area...
43
entries
9
designers
Design a "Trompe-l'œil" NINJA for a hostel in Japan!!
¥58,908
We are opening a hostel in Japan to welcome foreigners from all around the world so our customers will be travelers and
62
entries
9
designers
Social media competiton image for campervan company
AUD 259
We are a campervan hire company operating in Australia and New Zealand. We target (majority) the youth market, backpacke
100
entries
33
diseñadores
CONTEMPORARY, COOL AND MODERN TRAVEL POSTER LEADING INTERNATIONAL AIRPORT
DKK 7,500
Hamburg Airport is the largest airport in northern Germany, with a total of over 13mio travelers passing through on an a
495
entries
100
designers